“SANDS OF SILENCE: Waves of Courage” is

“SANDS OF SILENCE: Waves of Courage”

Moderated by Patt Morrison of the Los Angeles Times

Watch the 34 min. video of the Panel Discussion

“SANDS OF SILENCE: Waves of Courage” is the LA Press Club’s 2017 SoCal Journalism Awards Feature Documentary Winner. Through the transformation of sex-trafficking survivor Virginia Isaias into an inspiring advocate, “Sands of Silence” celebrates the triumph of the spirit with a call to action to break the chains of sexual violence worldwide.

“In a searing exploration of the sexual exploitation and trafficking of women worldwide, journalist Chelo Alvarez-Stehle also documents her own relatives’ sexual abuse, as well as her own, as they work through their efforts at coping and healing. A moving, poignant documentary of women learning to deal with the physiological and psychological stresses of abuse.” – LAPC 2017 SoCal Journalism Awards Judge. 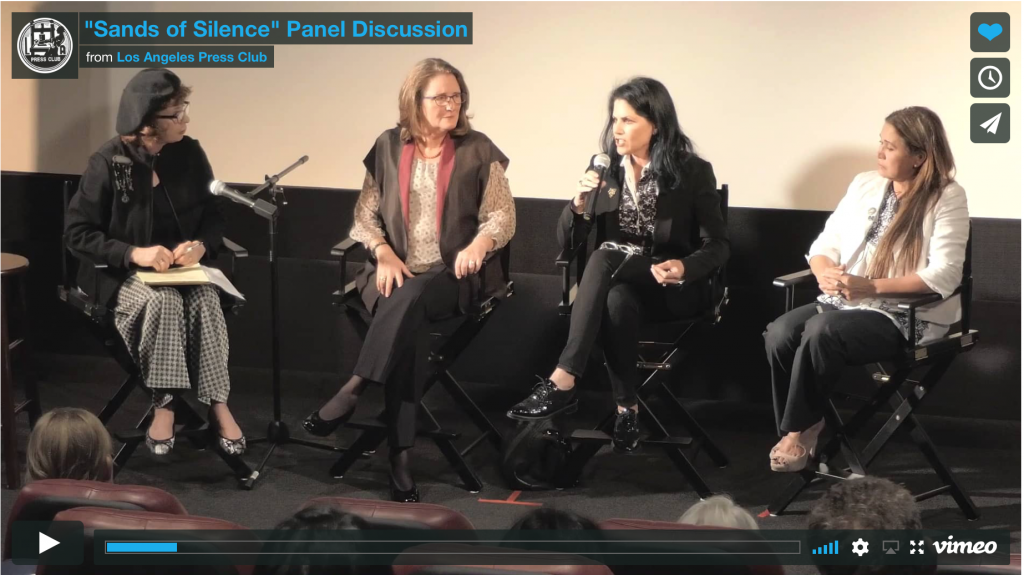 Recently #DirectedbyWomen had a chance to delve into conversation with reporter and documentary filmmaker Chelo Alvarez-­Stehle about her moving film Sands of Silence: Waves of Courage and the impact it is having on communities around the world. She also shared the surprising direction her work is leading her to explore next. The topic of sexual abuse and trafficking is challenging. It can feel easier to simply look away, but please take time to receive what Chelo has shared and look for the chance to experience her work. Info about upcoming screenings can be found at the end of the post. 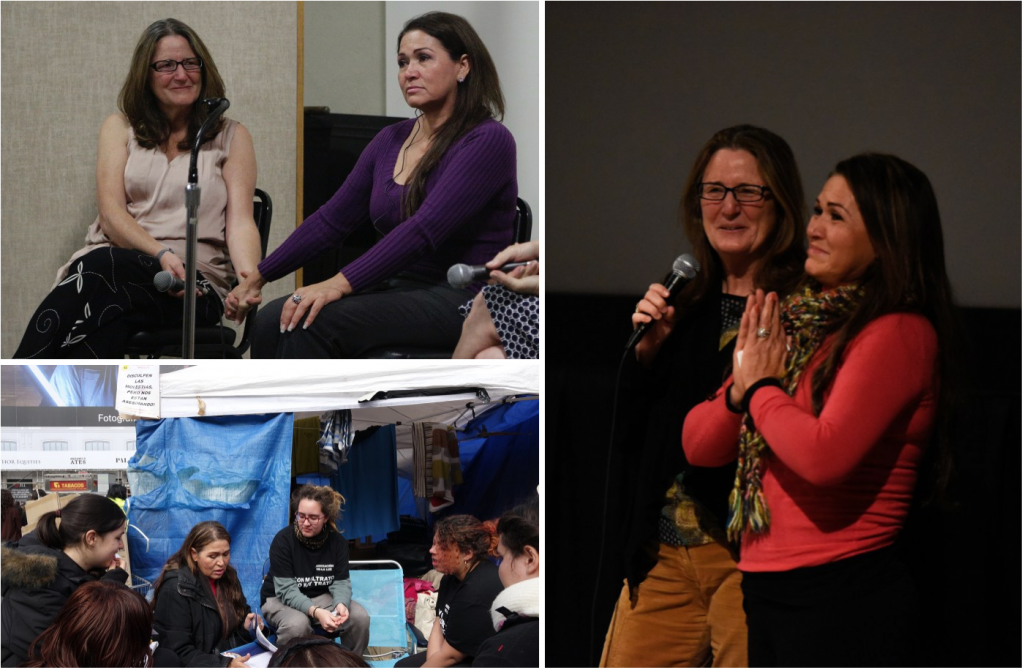 DBW: Your documentary Sands of Silence: Waves of Courage takes on such a powerful subject. It’s multifaceted in its approach, dealing with the nexus of sexual abuse and sexual trafficking. And it takes us deep into the complexities of how these forms of abuse impact not only individuals but families as well.  I’d love to hear your thoughts about how the film is resonating with film audiences and the impact it is having.

CA-S: We’ve felt overwhelmed by the cathartic experiences audiences are having. At every screening people of all ages are going deep into their experiences, bringing past or recent memories, identifying them as abuse, calling them by their name, breaking the silence, so much so that we enlist volunteer therapists or psychologists to attend and be ready at the Q&As with their expertise and resources.

That is why we say that Sands of Silence is “the film that inspires you to break the silence on sexual violence.” Many of those people speak up for the first time.

But after touring Europe and the US with the documentary we know that it also goes beyond that. A college freshman at a university in Spain insisted on talking to me after the screening. She had gone to a physical therapist for a shoulder problem. He convinced her, by showing her information on Google, that he needed to touch a point in her vagina in order to cure her. He ended up inserting a vibrator in her vagina. “Finally something clicked for me and I left. My mother did not believe me, and when she finally did, she went to confront him, but he denied everything. Please help me. Now I have nightmares. I don’t even let my dad approach me. And I want to report him but I don’t know how.” I was able to refer her to an association of women lawyers that provides legal pro bono services to victims.

Often it is those closer to us that don’t believe us.

Our first review in French, after our Paris sneak preview on March 19th, hosted by Centre Audiovisuel Simone de Beauvoir, at the Luminor – Hôtel de Ville the historic movie theater in Le Marais, the heart of Paris!

(The Women in Film and Television Showcase)

“Sands of Silence is a remarkable film, in that through the potency of its storytelling, it exposes the humanitarian issue both on the surface and beneath, of the suffering of individuals affected by this odious crime. The film has embolden others to speak and  to no longer live in the ‘silence’.”

TheWIFTS Foundation was honored to count with talented and celebrated actress Julie Carmen (Gloria Milagro Beanfield War, Windows on the World) as Mistress of Ceremonies for the 10th anniversary of TheWIFTS Foundation International Visionary Awards 2017, celebrating inspirational and outstanding women. These ‘women as individuals’ from around the world will receive Awards for their work in Film, Television and Society.

TheWIFTS Mission Statement: To honor outstanding women who continue to “raise the bar” in their respective fields. The Foundation will research noteworthy, unknown or known individuals who have made a difference in their respective communities but have yet to be acknowledged and commended for their extraordinary efforts and positive impact on our society.

Agnès Films, supporting women and feminist filmmakers recently reviewed, Chelo Alvarez-Stehle’s Sands of Silence, documentary film. The review by Julie Caper Roth, says: “Sands of Silence demonstrates that trauma is not merely the plight of women in far-off lands. It can exist close to home and can only be felled by transparency and communication. The narratives contained within the documentary make this film a helpful resource for individuals and groups tackling the issues of abuse and sex-trafficking.” 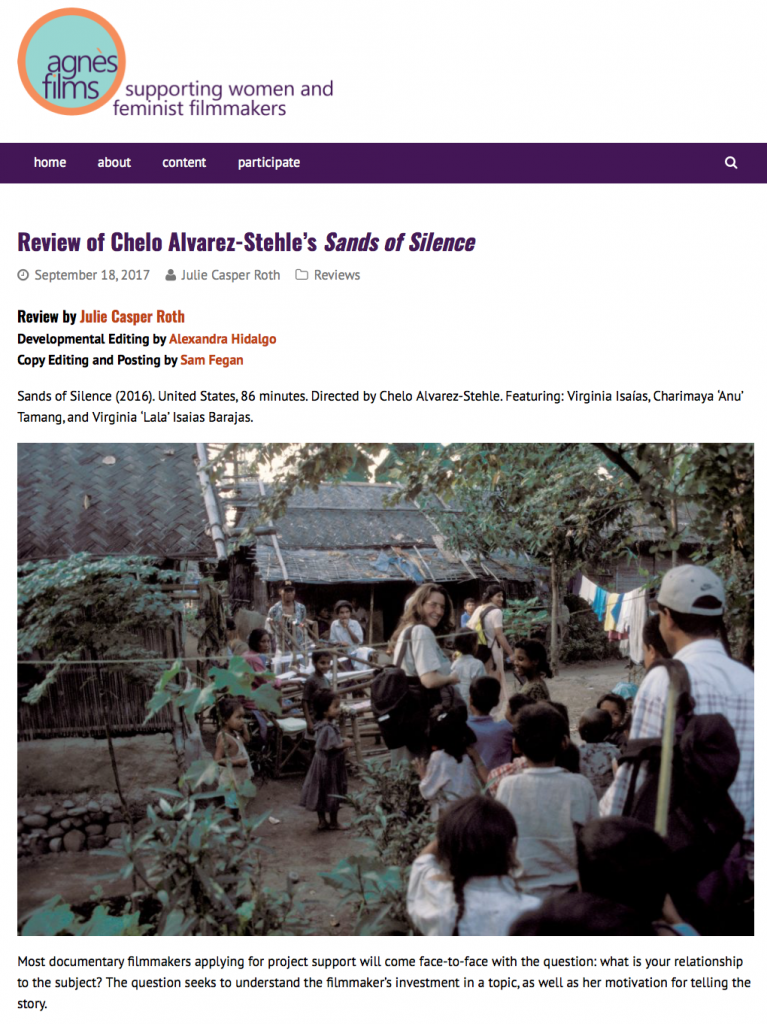 SANDS OF SILENCE: Waves of Courage

Geolocalized broadcast in Spain’s territories on the occasion of the

International Day for the Elimination of Violence Against Women

the country’s public television system which counts with the largest audience.

Read below my #MeToo article published in Spain’s daily EL PAÍS on the eve of the broadcast. 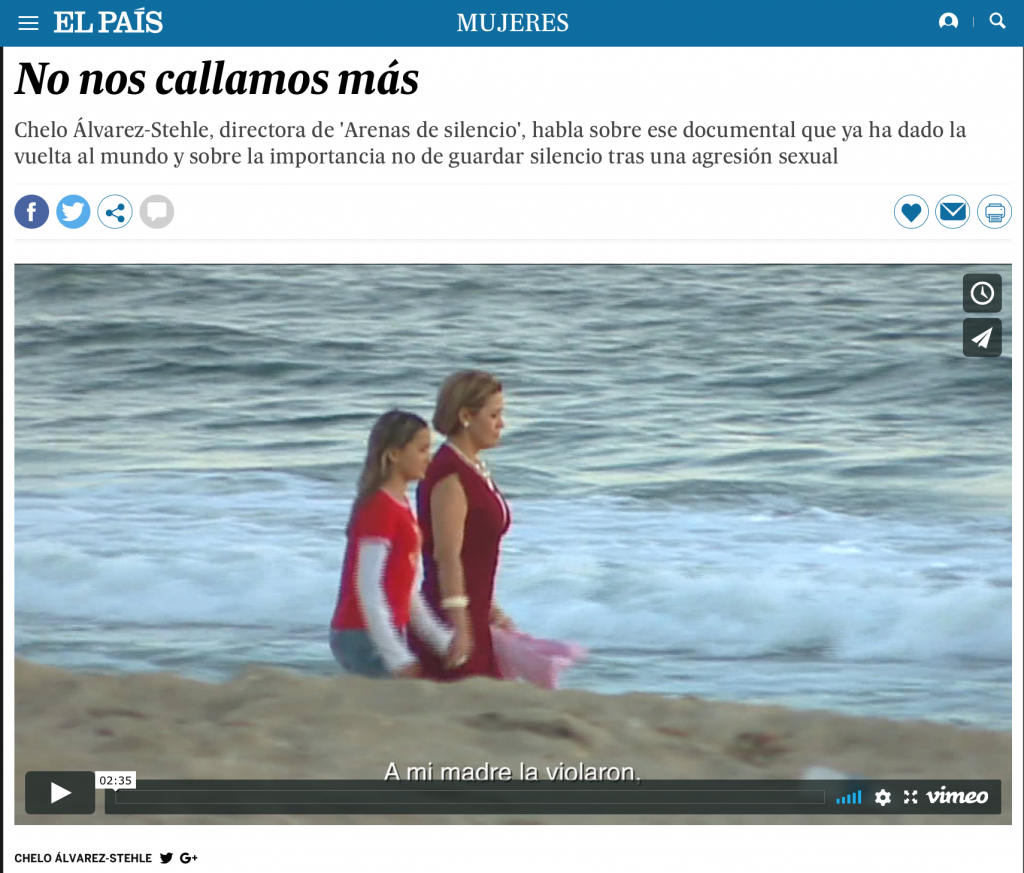 (The themed night), a documentary program that addresses

society, culture and current affairs from different point of views. 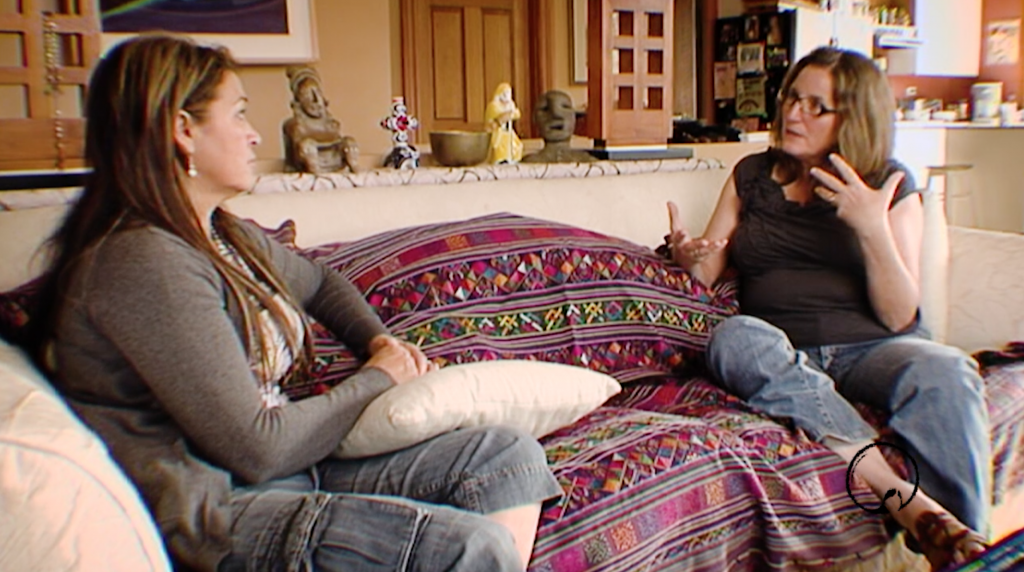